Acronyms, Branches, Constant Learning: Our ABCs of growth over the last 12 months

When you have a home market of 5.5 million people, if you really want to make it big, you have to think international from day 1. As a fintech startup in a digital world, working with a newly standardised European banking system, “going global” should have been straightforward for Holvi.

But it turns out that our international expansion succeeded in spite of these things, not because of them. Confused? We certainly were. So we thought we’d share a few of the things we’ve learned over the last 12 months and how they’ve impacted our approach.

One of the EU’s main initiatives to simplify and standardise banking is SEPA, the Single Euro Payments Area. In a nutshell, it states that all SEPA members - the EU28, Iceland, Liechtenstein, Norway, Switzerland, Monaco and San Marino - have to accept IBANs from all other SEPA members. This means that if you try to pay for a service in, say, Italy and you’re using a Belgian IBAN it has to be accepted. It’s guaranteed under EU law.

For Holvi it means we’re able to provide a business account with a Finnish IBAN for our customers outside Finland, anywhere else in SEPA. This works exactly as a local IBAN does, the only difference being the two letter code at the start. It’s incredibly convenient for consumers and it also makes things easier for businesses working across borders.

Or so we thought.

But then we ran into IBAN discrimination.

Our users were complaining that their IBANs were being rejected because they were not localised. The fact that they had an IBAN starting with FI (and not, say, with DE in Germany) meant they were not able to pay utility bills, start a phone contract, or even do tax returns!

Not only is this illegal, it is also a huge inconvenience for our customers. But to get it solved we only really had two choices.

We picked the latter, and earlier this year opened a local branch in Germany, our biggest foreign market. It wasn’t on our roadmap, and it wasn’t the easiest thing to do, but it certainly paid off. Since then we’ve enjoyed 40% customer growth in Germany!

Aside from our cartoons and Insta-worthy landscapes, Finland happens to be Europe’s most digitally advanced country. We have almost 50% more broadband connections than people, and our mobile data usage, per capita, is five times higher than the average.

“Banking has been very local for decades”, explains Elina, our VP of Marketing and Comms. “There are relatively few banks providing services across borders without physical offices, aiming to be both digital and international. And there’s even less that do it by focusing on SMEs. It’s just not something people are used to.”

This is not to say the Finnish system is necessarily better, rather just that the way we do banking, the technology we use and our expectations from such a service are very different from those in Holvi’s other target markets. The challenge for us was how to bridge this gap and make our product match banking habits abroad.

“We did a lot of research with our target segment, trying to understand what they like, what they don’t like, essentially what makes them tick,” Elina recalls. “But at the end of the day, what really drives results is learning by doing.”

“You need to let people know you exist! You need to grab their attention, you need to get them using your product. And when they do, you need to watch and learn from them. The devil is in the detail,” she adds. 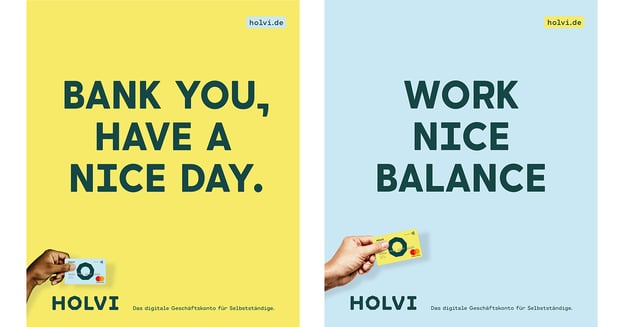 To get this attention as a (relatively) unknown player in an already crowded marketplace, we knew we had to stand out. Which is why we launched our first OOH campaign in Germany earlier this year, and we’re delighted to say it’s been a huge success! It’s helped us to grow our brand awareness over 200% amongst our target demographic in Berlin, Hamburg and Munich.  It’s helped us attract new users. And, most importantly, it’s helped us learn from them about how to tailor our service to their specific needs.

Ultimately these are the things we’ve pinned our success on, they’ve helped us to grow our service 60% year on year. Because IBAN discrimination will not simply disappear overnight. And there will always be differences in tech and consumer habits across borders. But the key is to adapt, to learn and to try and improve. “There is no existing playbook for how to do this,” Elina concludes. “It’s been interesting and exciting - with a lot of rough learning, and no doubt plenty more to come. But we’re ready!”.